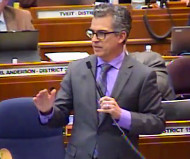 The North Dakota House of Representatives does not want police to be able to set up roadblocks to detain and question motorists without any reason to believe they are engaged in wrongdoing. Under legislation passed last month by a 79 to 14 vote, driving under the influence (DUI) checkpoints would no longer be allowed in the state. The measure is now before the state Senate Judiciary Committee.

"The cold hard fact... is that sobriety checkpoints are terrible at apprehending drunk drivers," state Representative Rick Becker (R-Bismarck), the bill's sponsor, said. "They fail miserably at apprehending. There's really not much debate on that aspect."

Becker pointed to a study that showed 63 percent of individuals with a blood alcohol content above the legal limit of 0.08 were able to slip through a roadblock undetected. Becker insisted that roving patrols of police officers on the lookout for drunks behind the wheel had much higher success rates.

The states of Alaska, Idaho, Iowa, Michigan, Minnesota, Oregon, Rhode Island, Texas, Washington, Wisconsin and Wyoming ban DUI roadblocks even though the 1990 US Supreme Court case Michigan v. Sitz upheld the constitutionality of the practice. The Michigan Supreme Court justices disagreed with their federal counterparts and banned their use under the state constitution. While Becker has Fourth Amendment concerns about roadblocks, his primary motivation is ending their use on the grounds of practicality.

A copy of the bill is available in a 50k PDF file at the source link below.