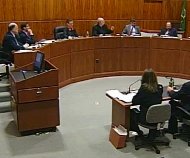 The city council in Bellingham, Washington voted 6-1 Monday night to respect the wishes of voters and pull out of a red light camera and speed camera contract. The city entered an agreement with American Traffic Solutions (ATS) in May 2011 to install the devices, ignoring local activists who had been collecting signatures for a ballot measure opposing camera use.

After a long and drawn out legal battle, the camera ban was placed on the ballot as an advisory measure in November and earned 68 percent of the vote. The same election replaced then-Mayor Dan Pike, the man responsible for the camera contract, with Mayor Kelli Linville who said during the campaign that the cameras were a mistake.

"I think that the mayor and the city council need to pay a lot of attention about what the public thinks about this," Linville said during an October 21 debate. "I personally don't think that it's a good way to generate revenue. The studies show it's not necessarily a good way to make them safer."

Linville and the council approved a settlement that gives ATS $100,000 to break the contract. As part of the deal, the city states that if it decides to implement red light cameras and speed cameras within the next five years, ATS must operate the system. The council president thought this went too far.

"I'm not going to approve it because I don't think we have an extra $100,000 to give away," Councilman Terry Bornemann said.

The sponsors anti-traffic camera initiative Tim Eyman, Johnny Weaver, Alex Rion and Nick Sherwood enthusiastically supported the plan and suggested other mayors should emulate Linville's respect for the public will.

"Bellingham's mayor has illustrated that Monroe and Longview can also get out of their camera contract early if they really wanted to," the sponsors said in a statement. "Last night was a mega-victory in our ongoing battle against those obnoxious ticketing cameras which are simply a taxation-through-citation scheme."