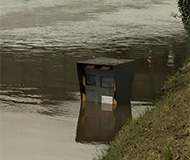 Vigilantes in Kidderminster, England torched a speed camera last week Monday. According to the Kidderminster Shuttle, a burning tire was used to take out the automated ticketing machine on Wolverhampton Road.