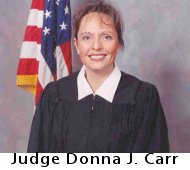 The Ohio Court of Appeals on Monday ruled that a motorist cannot be convicted of speeding based solely on how fast his car may have sounded. On October 18, 2007, Patrolman Ken Roth ticketed Daniel Freitag in the village of West Salem as Freitag was driving with his wife Jane on US Route 42. Roth claimed his radar unit clocked Freitag at 42 MPH in a 35 zone. Roth also claimed he could hear Freitag's 2006 Lincoln Navigator speeding.

"As it approached I could hear the vehicle on the roadway which based on my training and experience it is consistent with a vehicle that was in excess of the posted speed limit," Roth testified.

A trial court judge on November 16, 2007 accepted this testimony and found Freitag guilty. Freitag challenged this decision before the Ohio Court of Appeals on the grounds that the radar evidence was not admissible. The trial court claimed it had taken judicial notice of the "Genesis Radar" that Roth used, but the state failed to specify which particular radar model was used. Freitag won on the point that the radar evidence was improperly admitted, but he lost as the court sent the case back to the trial judge to rule whether the officer's estimate of Freitag's speed based on the Navigator's sound was credible. The trial court once again supported the officer and ruled that Freitag was guilty.

Freitag, however, did not give up. He appealed a second time, insisting that the officer's testimony that he could estimate a vehicle's speed by its sound or by watching a car's headlights through the patrol car's rear-view mirror was absurd. This time, the appeals court agreed.

"In weighing the evidence and all reasonable inferences and considering the credibility of the witnesses, we conclude that this presents the exceptional case, where the evidence weighs heavily in favor of Freitag," Judge Donna J. Carr wrote for the court. "The weight of the evidence does not support the conclusion that Freitag was exceeding the posted speed limit, specifically because Patrolman Roth's testimony that he audibly and visibly determined that Freitag was speeding is not credible... It is simply incredible, in the absence of reliable scientific, technical, or other specialized information, to believe that one could hear an unidentified vehicle 'speeding' without being able to determine the actual speed of the vehicle."

A copy of the final appeals court decision is available in a 50k PDF file at the source link below.