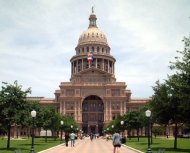 A key committee in the Texas legislature today became the latest state legislative committee to turn aside efforts to expand red light cameras. By a 4-2 vote the Urban Affairs Committee approved an explicit statewide ban on the devices. The bill will now move to the full House which voted overwhelmingly in 2003 to defeat a bill that would have allowed cities to operate red light cameras.

Today's measure was introduced in response to attempts by the city of Houston to use cameras without authorization from the legislature. It repeals an amendment inserted into a transportation bill in 2003 giving cities the ability to regulate transportation civilly or criminally. Houston interpreted this as a green light for cameras.

In the past two weeks Virginia and Utah legislative committees have also rejected red light cameras by a similar margin.

A BILL TO BE ENTITLED
AN ACT relating to the powers of a county, municipality, or local entity with respect to the regulation of traffic on highways under its
jurisdiction.

BE IT ENACTED BY THE LEGISLATURE OF THE STATE OF TEXAS:
SECTION 1. Section 542.202(b)(3), Transportation Code, is repealed.
SECTION 2. This Act takes effect immediately if it receives a vote of two-thirds of all the members elected to each house, as
provided by Section 39, Article III, Texas Constitution. If this Act does not receive the vote necessary for immediate effect, this Act takes effect September 1, 2005.